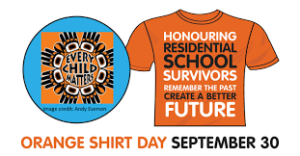 ORANGE SHIRT DAY September 30 -The Province of British Columbia has proclaimed September 30 to be Orange Shirt Day—a day to honour the Indigenous children who survived residential schools and remember those who didn’t. Orange Shirt Day began in Williams Lake, B.C. in 2013 where, at a commemoration event at a local residential school, a story was told about a young female student named Phyllis who had her brand-new orange shirt taken away on her first day at the school. The orange shirt is a symbol of the many losses experienced by thousands of students and families due to residential schools. Since it began in 2013, the phrase “Every Child Matters” has been used as part of the movement to recognize the value of every child and for communities to come together in the spirit of reconciliation and hope for future generations. Learn more at www.orangeshirtday.org

All New Westminster schools will be recognizing Orange Shirt Day. Students are encouraged to wear orange that day. There will be activities and lessons in the school that will foster students’ understanding of the impact of residential schools. This is just one of many actions that New Westminster Schools will be undertaking as part of the school district’s response to the Truth and Reconciliation Commission’s Calls to Action.